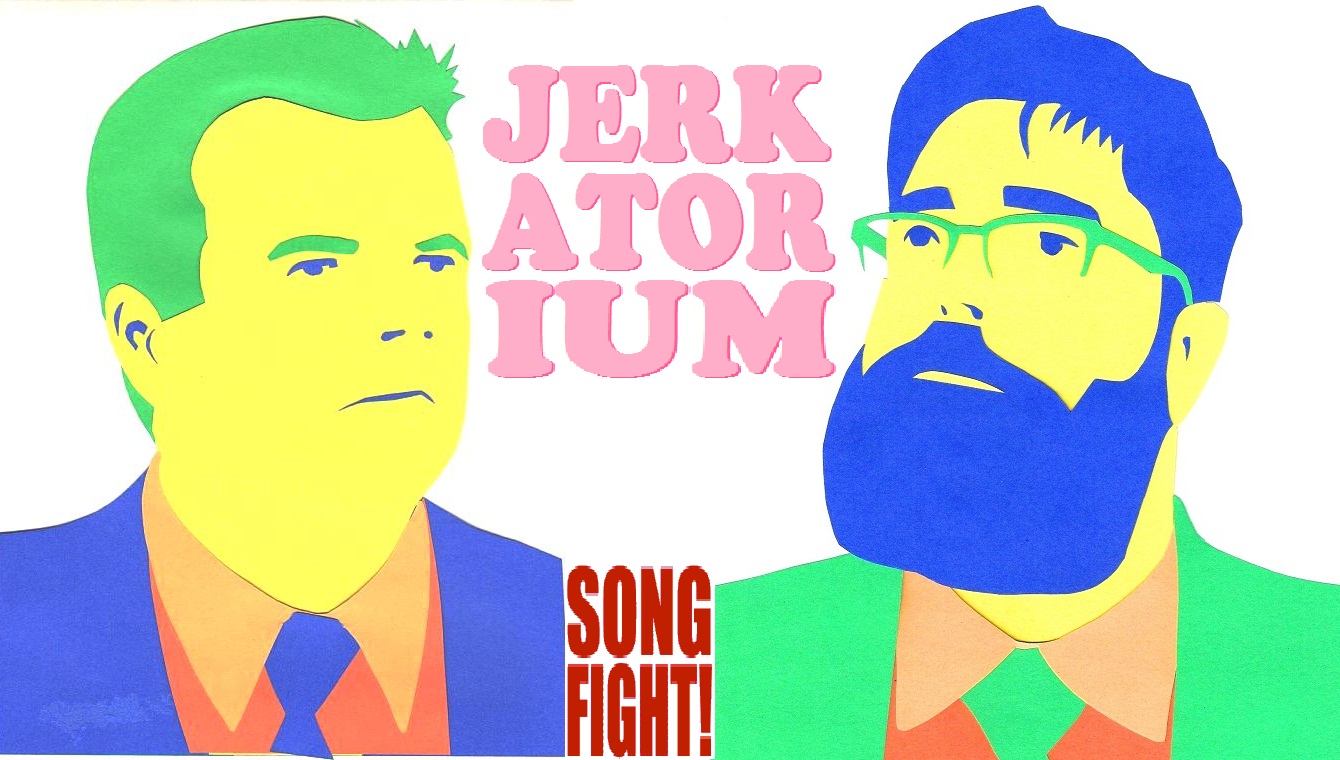 Jerkatorium won second place in SpinTunes 16 Round 3 with our song "Something Right", which you can hear and download for free on Bandcamp:

That Round 3 challenge was to write a "song of wisdom"; an uplifting song to sing for a graduation ceremony, dedication, Bar/Bat Mitzvah, funeral, baptism, or similar event.  We went with a general celebratory song about graduation.


Jerkatorium followed that up by winning second place in SpinTunes Round 4 with our song "Oh Pandora", which you can also hear and download for free on Bandcamp:

That Round 4 challenge was to write a song about something that seemed like a good idea at the time, but ended very badly, as in the types of situations described by the Darwin Awards.  We went with the Pandora myth, where Pandora was given a jar (the popular misconception that it was a box, but it was a jar) as a wedding gift from Zeus, and when she opened it all evils were loosed upon the world. 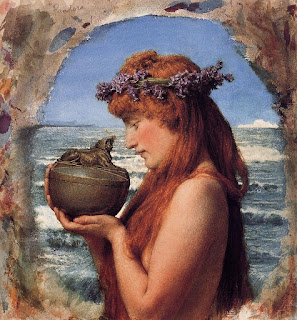 I'll admit that I buried the lead a bit here:  When I write that Jerkatorium won second place in SpinTunes 16 Round 4, I am actually reporting that Jerkatorium lost SpinTunes 16.  There are only four rounds in SpinTunes, and only one winner, and we came in second by a wide margin.  Second place out of 27 competitors is not shabby though, and we strongly agree that the band Temnere had a better song than ours, and he definitely deserved to win.  Temnere (Wil Whalen) is also an extremely talented visual artist, and you can see some of his great artwork at Artstation.com.
Posted by Ryan Finhork at 2:23 PM No comments:

Jerkatorium is competing in SpinTunes 16, and we just won Round 2.  We did well in Round 1 with our song "In The Future" placing 5th out of 27 entries, and now we've won 1st place out of the remaining 20 bands with our song "8-bit Love".  You can hear it and download it for free at:

There are a total of four rounds in SpinTunes and scoring isn't cumulative, so winning Round 2 doesn't give us any real advantage or benefit other than bragging rights.  It's nice to know that we're probably on the right track though, because 2/3 of the remaining bands (8 out of 12) will be eliminated in Round 3.

We also recorded a podcast of SpinTunes 16 Round 2 song reviews with Tommy G of Boffo Yux Dudes (Tommy is also the host of the Listening Parties on YouTube), and that is available at Two Jerks One Vote - but as I've mentioned before, I doubt the podcast would be of interest to anyone who isn't actually participating in the competition.  You can find it at this link:

"In The Future" Jerkatorium Music Video

Jerkatorium is competing in SpinTunes 16 this year instead of judging.  Judging and podcasts are all well and good, but we noticed that they were taking time away from music production so we're going to avoid those for a little while.

The first song assignment in SpinTunes 16 was to write a song based on a scene on a book or movie.  After a lot of consideration we went with the introduction scene in Plan 9 From Outer Space, and we made a music video for the song just for fun:

If the video embed doesn't work you can get to it through this link:
https://www.youtube.com/watch?v=heEkGJenufM

You can download the song for free at bandcamp:
https://jerkatorium.bandcamp.com/track/in-the-future

We also collaborated with owl (from miscellaneous owl, Vowl Sounds and Gentle Brontosaurus) for the "Try Me" Song Fight, submitting as "Miscellaneous Jerk".  We did okay in that fight, getting 5th place out of 17 entries.  You can hear the song here:
http://www.songfight.org/music/try_me/miscellaneousjerk_tm.mp3

More songs to come every other week (and maybe videos too?) for the next several weeks due to this SpinTunes competition.  Check back for updates.
Posted by Ryan Finhork at 7:20 PM No comments:

Just in time for Halloween - a Super Creepy music video!

All of the footage was edited together from the few Bread and Puppet videos I could find at Archive.org that were listed as Attribution-NonCommercial-ShareAlike 4.0 Creative Commons and NOT listed as "No Derivatives" (most of their videos ask users not to distribute remixes of their footage, and I respect that restriction for the videos marked as such).

Find out more about The Bread and Puppet Theater at:
www.breadandpuppet.org

Posted by Ryan Finhork at 3:21 PM No comments:

Okay yeah, I'm not good about updating this blog, I see it's been 9 months already.

Jerkatorium won both of the Song Fight competitions we entered during that time.  Back in March we won the Silent Advance Song Fight by a very comfortable margin, and you can hear the song at this link:

The cover art for that song was done by the super-talented artist "happy triangle" aka The Bomberanian: 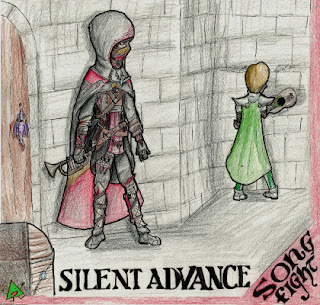 The art is a brilliant take on the Song Fight graphic/logo: 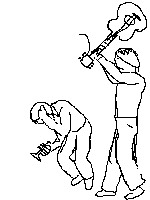 If you want to see more art by happy triangle, you can check out her Deviant Art page at:

...or her Song Fight art submissions at:

http://www.songfight.org/artindex.php?sortkey=artist&thumbs=false
[You'll need to scroll down to "Happy Triangle" to see her list of submissions]

Jerkatorium also won last month's Liquid Starshine Song Fight by one vote - so if you voted for us, thank you!  You are definitely the voter who put us over the top.  It was a big group of great songs and the top 7 entries were each just a couple votes away from each other so it could have gone to anyone, we just lucked out.  You can hear the song at this link:

And since I mentioned the podcast I'll also mention that we are still doing review podcasts, but not as regularly - we were good about doing a podcast for every competition until the beginning of July, but then we slipped a little and accidentally took a couple of months off.  The podcast will only be of interest to bands participating in Song Fight and/or Nur Ein and/or SpinTunes, but they are available at the following link:

Oddly enough, somehow we ended up on a list of "Top 20 Songwriting Audio Podcasts & Radio You Must Subscribe and Listen to in 2019" at the Traveling Rockstars blog.  And maybe at Feedspot.com too?  I'm afraid to register at Feedspot.com so I don't know what that looks like, but the Traveling Rockstars blog lists "Feedspot's editorial team and expert review" as one of its selection criteria.  They said we could display this badge on our podcast site, so hooray for us: 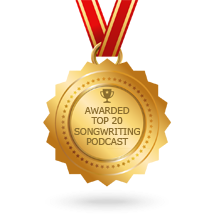 I still think our podcasts would sound like gibberish to anyone who isn't competing in Song Fight or Nur Ein...  but hey, look at our shiny badge!
Posted by Ryan Finhork at 4:48 PM No comments:

Lots has happened since the last blog update, with one new Jerkatorium song, three new songs by our alter-ego band Matchy Matchy, and fifteen (yes, fifteen) new podcast recordings.  In addition to that, there are also some podcast theme revisions and remixes, and a podcast-related Jerkatorium collaboration with Micah Sommersmith.

Jerkatorium returned as judges to the SpinTunes 15 contest this year, which naturally prohibited us from competing again... but just like when we judged SpinTunes 14, we did submit non-competing songs (dubbed "shadow" entries) again under the name Matchy Matchy.

The Round 2 challenge was to write a song that expresses sincere gratitude.  As an extra requirement, the song had to include vocal harmonies.  We submitted the song "Thanks", which was heavy on the harmonies and light on the sincerity:

The Round 3 challenge was to do a "pastiche" song; a song in the style of a different band.  We decided to ape A Flock of Seagulls with our song "Eagles":

The Round 4 challenge was to write a cumulative song a la "12 Days of Christmas" or "There's A Hole In The Bottom Of The Sea".  Forces beyond our control conspired to prevent us from completing a shadow entry for Round 4, but Micah Sommersmith (winner of SpinTunes 14, judge for SpinTunes 15, and occasional Jerkatorium collaborator) accepted our offer of help in generating some backing music for a song he'd composed to supplement his Round 4 reviews - and the format of his song is also a cumulative song.  It's entitled "Third Cat Wrote A Very Good Song":

After our SpinTunes 14 podcasts last year we decided to start doing Song Fight review podcasts, and then for Jerkatorium's SpinTunes 15 judging duties we returned to recording podcasts for our SpinTunes reviews too.  All of those podcasts can be found at https://twojerksonevote.com.  The podcasts are free to stream or download, but as I'd explained in a previous post:  The podcasts are very specifically geared towards SpinTunes and Song Fight, and they would probably not interest anyone who wasn’t already following those competitions.  We try to add humorous bits and clips to the podcasts as time permits, but even those bits are mostly inside jokes.  We've re-recorded versions of the podcast theme song to fit SongFight and SpinTunes as applicable, and lately we've been doing different podcast theme remixes for each of the more recent episodes.  Micah Sommersmith composed an original alternate podcast theme for the "ST15R1: Strange New World" podcast, and that version also reappears in the "ST15R4: It Grows On You" podcast.  We occasionally have guest reviewers (Micah Sommersmith, Brian Raiter, Andy Hamlin, and hopefully others soon).  Regardless - the podcasts won't have much to interest anyone who is not following Song Fight or SpinTunes.

Jerkatorium took a pretty big step away from our usual approach to music in our submission for the October 2018 "Blue Woman Yes" Song Fight, going for a more hard rock sound.  You can hear that here:

The Song Fight Fightmaster picked happy triangle's cover art submission for that "Blue Woman Yes" Song Fight, and that was a great choice; it's an excellent illustration by a wonderful artist, and it includes calligraphy from Brian Raiter: 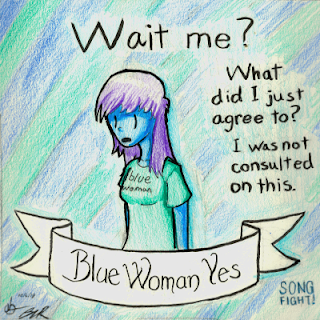 Posted by Ryan Finhork at 1:04 PM No comments:

New Jerkatorium video for "We Should"

The new video for We Should is now on YouTube:

If the YouTube thing within this post doesn't work on your device, you can find it at this link: